Start a Wiki
The Retarded Adventures of Lisa Simpson (often abbreviated as RAOLS) is a series of comics set in the Snospis Eht universe. The series is a parody of the popular television show The Simpsons.

The main character in the series is the eponymous Lisa. Other characters include her mother Marge, her father Homer, her brother Bart and her sister Maggie. Lisa is often seen unemployed and searching for a job. 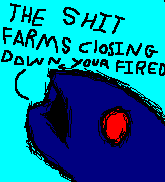 Mr Fishly telling Lisa that she is fired.

Mr Fishly telling Lisa that she is fired.
Add a photo to this gallery
Retrieved from "https://andywilson92.fandom.com/wiki/The_Retarded_Adventures_of_Lisa_Simpson_(series)?oldid=4262"
Community content is available under CC-BY-SA unless otherwise noted.